On 30 May 2013 the US National Archives and Records Administration (NARA) opened a consultation period on its proposed ‘Capstone’ approach to managing e-mail.  If the approach is adopted US federal agencies will be asked to schedule the e-mail accounts of senior staff for eventual transfer to NARA and permanent preservation.

‘Capstone’ is the term used for the apex stone on top of a pyramid.  The capstone is the only stone in a pyramid that looks out in all four directions.  On the US dollar bill the capstone of a pyramid is depicted as an all-seeing eye.

The nature of the Capstone approach to e-mail

Here is an extract from NARA’s description of their proposed Capstone approach:

Capstone offers agencies the option of using a more simplified and automated approach to
managing email, as opposed to using either:

Using this approach, an agency can categorize and schedule email based on the work and/or position of the email account owner.

The Capstone approach allows for the capture of records that should be preserved as permanent from the accounts of officials at or near the top of an agency or an organizational subcomponent.

An agency may designate email accounts of additional employees as Capstone when they are in positions that create or receive presumptively permanent email records.

Following this approach, an agency can schedule all of the email in Capstone accounts as permanent records.

The agency could then schedule the remaining email accounts, which are not captured as Capstone, as temporary and preserve all of them for a set period of time based on the agency’s needs

What does Capstone mean for electronic records management approaches?

It is almost two decades since e-mail came into general office use in countries such as the US and the UK.   For most of the this period central/federal government bodies in major economies operated an ‘electronic records management system’ approach.   This involved implementing an electronic records management system (or rigging up a collaborative system such as SharePoint or Lotus Notes to act as one) and asking individuals to move documents or e-mails needed as records into that system.

Some such organisations tried to prevent staff ‘hoarding’ important e-mails in their accounts by either placing size limits on e-mail accounts, or automatically deleting e-mail from e-mail accounts after a defined time period (for example a year after receipt).

Such organisations would tell their staff that e-mail was a communications tool, not a recordkeeping tool, and that e-mail accounts were only a temporary storage space.  They would tell staff that anything needed in the medium and longer term must be moved onto a file in the records system.

NARA’s proposed Capstone approach effectively turns this on its head.  It asks US Federal agencies to treat e-mail accounts as records – records that will , for some key members of staff, be kept in perpetuity.

A senior member of staff who left all their e-mails in their e-mail account and never filed or deleted anything, would in theory, be meeting their accountability obligations to US citizens.

In practice Federal agencies are going to have to carry on asking staff to move (or copy) important e-mails out of their e-mail accounts, even after Capstone comes into implementation.  Capstone is not a records management solution. For example it does not solve the problem of staff being unable to access important e-mails sent/received by their predecessor.  This is because the accumulations of private communications in e-mail accounts make standard e-mail accounts unshareable. 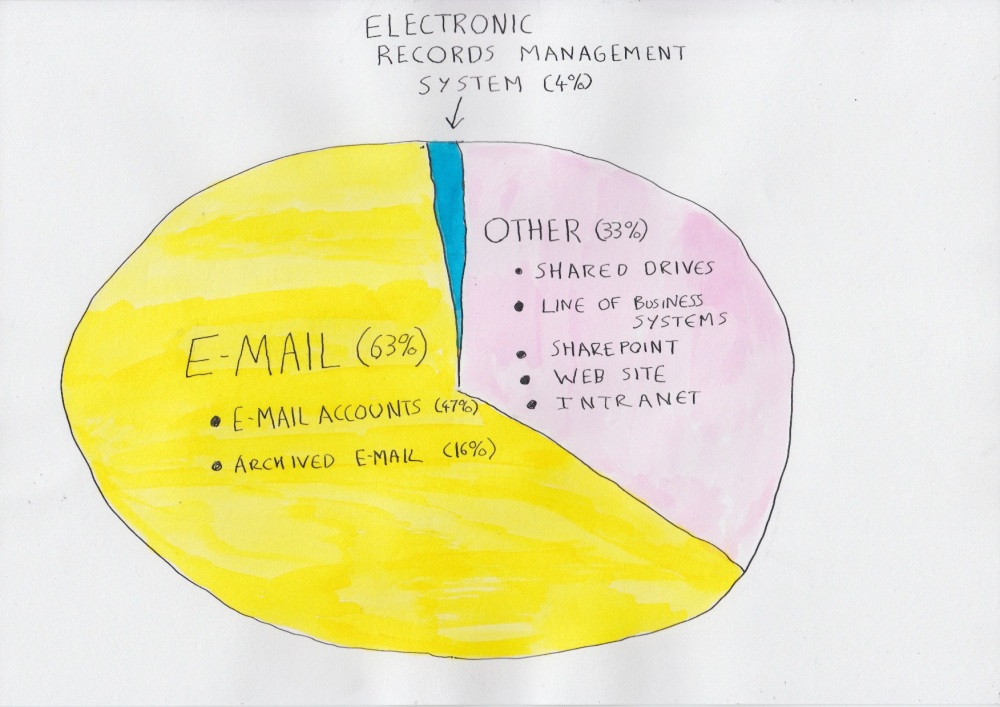 Storage percentages given to me by a global multilateral institution

To understand why NARA are proposing to permanently preserve e-mail accounts  let us look at what happens when an organisation implements an electronic records management system.

I recently heard a talk from a global multilateral institution who had a  strong records management programme in place. They had a good culture of record keeping stretching back over many years, longstanding senior management support, and a knowledgable and committed records and archives team.

At one point in the talk they gave figures for the total amount of storage taken up by the different information systems in their organisation.   The electronic records system, with its retention controls, accounted for only 4% of the total storage.  A further 33% were taken up by other document storage applications (SharePoint, shared drives, line of business systems,  their website and intranet.)  An astonishing 63% of the storage was taken up by e-mail – 47% in e-mail accounts and 16% in their e-mail archive.

I spoke to the archivist of the institution and asked whether she was concerned that only 4% of the records of the institution were under the protection and control of their retention schedule and fileplan.  She said was indeed concerned, but she also pointed out in the days before e-mail, a national archive would typically only take between 3 and 5% of the records of government bodies- a similar figure to the percentage of documentation kept in that institution’s electronic records management system.

It was a good point, but there is an important difference.   In the paper days a well organised central government department/ federal agency would have retention schedules covering almost all of their records, all across the organisation.  The 3 or 5% of the records selected for permanent preservation in the relevant national archive was a distillation of the whole:  like a  capstone at the top of the pyramid of the organisation’s records.

In contrast the electronic records management approach leaves us with a situation where the vast majority of records (96% in the case of the institution referred to above) are outside of any retention control.

From an archivist’s point of view that would only be acceptable if the electronic records management system was routinely capturing the most important of the institution’s documentation.

But the (roughly) 5% of information/documentation captured by electronic records management systems  is not necessarily the most significant 5% of documentation for the organisation.

An electronic records management system will typically contain a records classification that covers all of the work of the institution/organisation.  Within that classification there will probably be a file (or a document library if their records system is built in SharePoint) for each significant piece of work undertaken by the organisation.

The problem is that these files will not be complete.  There will be swathes of correspondence arising from those pieces of work that never make their way onto the relevant file/document library.

This is because filing routines are not consistent – they vary with the motivation, workload and awareness of each individual member of staff.   This inconsistency leads to gaps in the files held in electronic records management systems.  The files are set up to tell ‘the whole story of a piece of work’, but they rarely do.

On a day to day basis individuals rely on their e-mail account rather than the relevant file in the electronic records management system, so they tend not to act to fill in gaps in the file (and may not even notice the gaps).

In launching the Capstone consultation NARA are, in effect, saying that they do not trust the electronic records management system/SharePoint implementations of Federal Agencies to act as the capstone on top of the pyramid of all documentation and correspondence.

For the world of e-mail they are asking for a separate capstone – the e-mail accounts of senior staff.

NARA has no real option but to ask US Federal agencies to preserve the e-mail accounts of senior figures. NARA has a duty to future generations to preserve the correspondence of people playing significant roles in federal agencies.  If such correspondence is not finding its way into the ‘official’ electronic records systems of those agencies then NARA needs those e-mail accounts.