The story that the Financial Times [1] and other newspapers ran last week about the Cabinet Office 90 day email deletion practice is not new.   It was reported on 18 December 2004 by the BBC, two days before the deletions were about to start.   Here is the first part of their report [2] 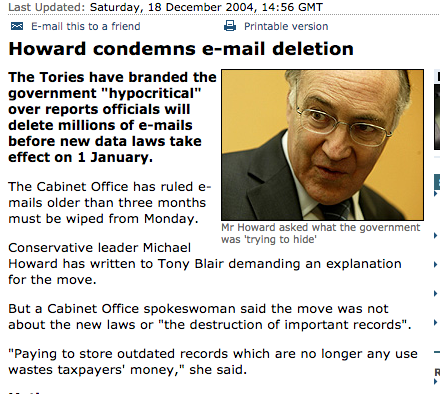 I tweeted a link to the BBC report on Saturday .   I received this tweet in reply

Imagine yourself back on the 18 December 2004, a fortnight before the UK’s Freedom of Information Act comes into force. It comes to light that the Cabinet Office, at the very heart of Government, is planning to have all emails that are over 90 days old deleted from their email servers.    In other words they are deleting about ten years worth of correspondence – a portion of which will have been captured elsewhere, but much of which will only have existed on those email servers.   The opposition leader has raised objections.   Why did archivists and records managers not raise this as an issue?

There are four main reasons why archivists/records managers did not object at the time:

This is an important case with significant implications for records management and archival practice.   We might usefully debate the following questions: